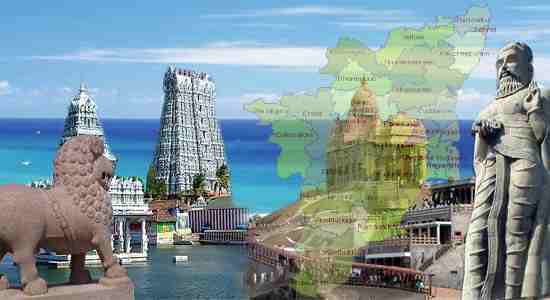 Tamil Nadu State has a population of 7,21,47,030 as per Census 2011 and covers an area of 1,30,058 sq.km Chennai (formerly known as Madras) is the State Headquarters.
Tamil Nadu is the second largest state economy and the second most industrialised state after Maharashtra. In 2013-14, its manufacturing sector growth at 3.53 per cent was higher than the country's growth rate for the sector at 0.71 per cent. In terms of gross domestic production
At 42,000, the state boasted of the highest number of factories in 2014 across segments: automobiles and components, castings and forgings, pumps and motors, garments and textiles, leather, and chemicals and plastics, to name a few. Along with Maharashtra and Gujarat, it is also one of the three states whose manufacturing sector is comparable with that of upper middle-income countries

One of the global electrical equipment public sector company BHEL has manufacturing plants at Tiruchirappalli and Ranipet. The Tamil Nadu state government owns the Tamil Nadu Newsprint and Papers (TNPL),the world's biggest bagasse-based paper mills in Karur as well as the world's sixth largest manufacturer of watches together with TATA, under the brand name of "Titan". 40 percent of all wind-generated electricity in India is created by windmills in Tamil Nadu. Danish wind power company NEG Micon has established its manufacturing unit in Chennai. Tamil Nadu is a leading producer of cement in India, if manufacturer of power plants cethar vessels in Tiruchirappalli.[clarification needed] It is the home for leading cement brands in the country such as Chettinad Cements (Karur), Dalmia Cements Tiruchirappalli and Ariyalur, Ramco cements (Madras Cement Ltd)etc., There is an ACC cement factory located at Madukarai in Coimbatore and UltraTech Cement(Aditya Birla Group) at Reddipalayam in Ariyalur.
High-density PolyEthylene (HDPE) mono filament yarn and associated products are manufactured in Karur. More than 2,000 units in & around the town manufacture fabrics for mosquito nets and fishing nets. More than 60% mosquito nets in India are manufactured in & around Karur which directly employs 50,000 people.
The region around Salem is rich in mineral ores. The country's largest steel public sector undertaking, SAIL, has a special steel plant in Salem, which is being expanded at a cost of 20 billion rupees. Salem also has magnesite factories operated by private and public sectors (public: Burn Standard & Co; private: Dalmia Magnesites). Tata have their presence in the form of Tata Refractories in Salem.
Mettur, a town which is located 50 km north of Erode and west of Salem, has a number of notable industries, including JSW Steels, MALCO (which has currently suspended its aluminium production), Chemplasst, Thermal Power Plant, Hydel Power plant.

The Textile Industry of Tamil Nadu has the distinction of being the forerunner to the industrial development of the State. The textile industry plays a significant role in the economy of the State and the export market of this industry is a source for earning foreign exchange. Handloom, Powerloom, Spinning, Processing, Knitwear and Garment production serve as a major employment provider to the qualified as well as ordinary public.
The handloom sector of Tamil Nadu is of heritage value and the history of excellent craftsmanship of handloom weaving in the state dates back by thousands of years.
The knitwear and woven garment sector is fast growing and the vital sector in the textile industry with an excellent export market.

The state has 70 per cent of the tanning capacity in India. Tamil Nadu is making a dominant presence in the leather and leather-based industries. Government has set up Industrial estates and common effluent treatment plants to provide possible infrastructure support and capital subsidies.

Tamil Nadu posses ideal climatic conditions for a strong agro based food industry. It also provides favorable climatic conditions for the cultivation of a variety of fruits and vegetables in the Madurai-Dindigul belt. Tamil Nadu has also proved itself as a world leader in agricultural production with a high yield per hectare of sugarcane, rice and groundnut. with the area around Coimbatore (identified as an intensive floriculture zone), Dharmapuri and the Nilgiris being earmarked as ideal locations for the cultivation of flowers such as rose and chrysanthemum, the floriculture industry is likely to get a boost. Its long coastline (1000 Kms) offers opportunities for marine products based industry.