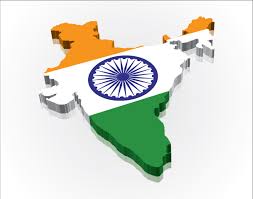 India earned its independence from the British on the 15-Aug-1947, the British army left from India in 1950. The Indians celebrate 26-Jan-1950 as the Republic Day of India. On this day the Indian constitution was adopted.

The country is surrounded by the Bay of Bengal in the east, the Arabian Sea in the west, and the Indian Ocean to the south. India occupies a major portion of the Indian subcontinent.

Afghanistan and Pakistan to the north-west; China, Bhutan and Nepal to the north; Myanmar to the east; and Bangladesh to the east of West Bengal. Sri Lanka is separated from India by a narrow channel of sea, formed by Palk Strait and the Gulf of Mannar.

The climate of India can broadly be classified as a tropical monsoon one. But, in spite of much of the northern part of India lying beyond the tropical zone, the entire country has a tropical climate marked by relatively high temperatures and dry winters. There are four seasons - winter (December-February), (ii) summer (March-June), (iii) south-west monsoon season (June-September), and (iv) post monsoon season (October- November)

Terrain: The mainland comprises of four regions, namely the great mountain zone, plains of the Ganga and the Indus, the desert region, and the southern peninsula.

Languages: Hindi, English and at least 16 other official languages