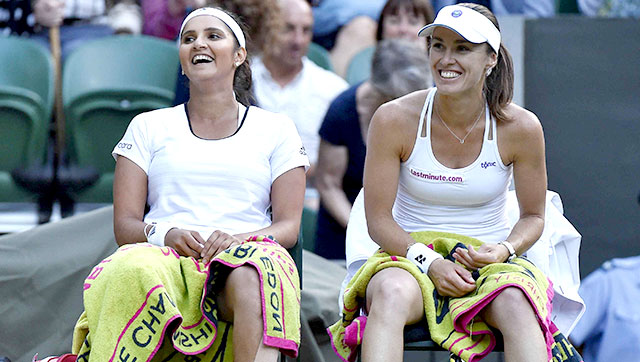 Top seeds Sania Mirza of India and Martina Hingis of Switzerland beat second-seeded Russian pair of Elena Vesnina and Ekaterina Makarova 5-7, 7-6(4), 7-5 to win the ladies' doubles title at Wimbledon on Saturday to win their first Grand Slam title as a team.
The win marks the first title at The All England Club for Mirza, and the first Wimbledon title for Hingis since winning the ladies' singles title in 1997, and her fourth Wimbledon title overall. Hingis also won the ladies' doubles title in 1996 and 1998.
This is the fourth title for Mirza and Hingis, who got together earlier this year in March. They won the Masters 1000 tournaments in Indian Wells and Miami as well as the Family Circle Cup in Charleston, South Carolina, in the United States.
Hits: 797, Rating : ( 5 ) by 1 User(s).